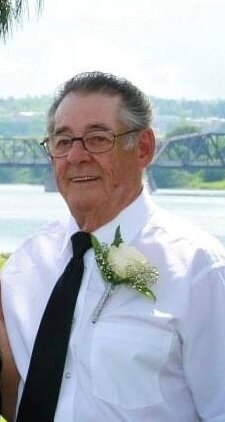 The passing of Elwood Douglas Haines of Kingsley, NB, husband of Ann Elizabeth (Merrill) Haines, occurred on June 16, 2022 at his private residence.  Born on March 3, 1938 in Dorn Ridge, NB, he was the son of the late Alonzo and Nina (Jones) Haines.  Elwood worked as a Construction Laborer he was an avid outdoorsman and enjoyed hunting. His pet peeve was the infrequency of getting his name drawn for a Moose license. He worked hard at a number of trades, could do almost anything with a hammer and nails until recently when his eyesight and hand coordination were failing.

Visitation will take place at York Funeral Home, 302 Brookside Drive, Fredericton on Tuesday, June 21, 2022 from 2 to 4 pm.  Interment will take place in Seymour Memorial Cemetery, Kingsley Road following the visitation, with Rev. Gordon Mowry officiating.  For those who wish, remembrances may be made to a charity of the donor’s choice.  Personal condolences may be offered through www.yorkfh.com